Given two strings s and t, return true if t is an anagram of s, and false otherwise.

An Anagram is a word or phrase formed by rearranging the letters of a different word or phrase, typically using all the original letters exactly once.

Let's this of what the problem is asking. We have to know the contents of the strings we're analyzing. We also have to make sure that we're keeping track of the letters as they should be exactly the same to confirm that it is an anagram.

Following that train of thought, we can early return if there is ever a difference in the letters they contain. But what does it mean to have the same letters? Well, essentially it's mapping out the frequency of each letter for the first word we iterate over. When we iterate over the second word we can double-check with what.

Checking back on the first example provided we can visualize this by counting each letter: 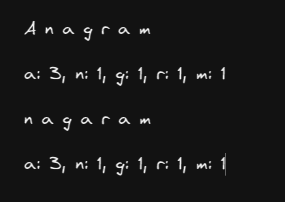 Looking at the counts we can use this to validate in place as we iterate over the second word. Let's see how this would look:

So the first time we run into the n in the second iteration we subtract it from the count. Anytime we go below 0 then we know the words are not valid anagrams.

Similar to our last problem we can use a hash table

In the first iteration, we add the frequency of every letter. If it doesn’t exist we create a 0 value at that point.

On the second iteration, we subtract all values. If no letter ever exists then we’ll hit the number 0 which means we’ll return a false.